Game Over in Anambra, and the Winner is … 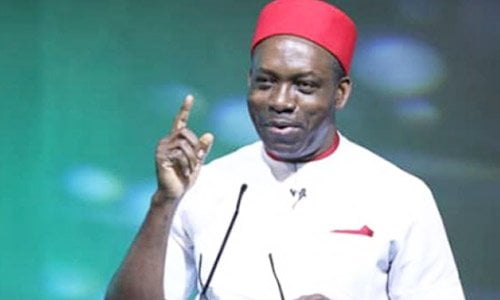 The forthcoming gubernatorial poll in Anambra State is four weeks away, but the winner is already well known. He is the only candidate campaigning openly, holding huge rallies everywhere. Opponents who allege that they cannot campaign on grounds of insecurity may not be speaking the truth. Soludo was attacked on March 31 in his hometown, killing three police guards.

The November 6 election was won last June 23 when the ruling All Progressives Grand Alliance (APGA) nominated former Central Bank governor, Chukwuma Charles Soludo, its candidate following the primary election which he won by over 93 percent. Perceptive politicians, journalists and analysts know the true situation in Anambra State now, but are frequently shy of stating the fact explicitly so as to create the impression of balance and neutrality; they also want to give the impression that there is a serious political fight going on in the state.

Opponents knew that Soludo would head for a decisive victory if nominated by APGA, and so did all manner of things to stop his becoming the party’s standard flag bearer. It was misinformation and disinformation all the way on the social media platforms for one year. Even with his nomination, the tricks didn’t abate. An opponent went as far as Birnin Kudu, which is a mere two kilometres to Niger Republic, to prevent his emergence. Some shadowy characters got a customary court in Abuja to issue criminals summons on Soludo, a bizarre action which prompted Chief Justice Ibrahim Muhammad to publicly initiate another a disciplinary action against the silly customary court judge.

Soludo seems the only issue in the electioneering in Anambra State. You are either for him or you are against him. Not surprising for a world-class economist and reformer who has been seeking to be the state governor since 2010, with the vision to transform its socioeconomic landscape the way leaders of Dubai, Hong Kong, Taiwan, South Korea, Thailand, Singapore, Indonesia, etc, have done to their places through positive disruptions and imaginative innovations. Soludo is a well-developed brand. In contrast, most of his opponents are hardly known. Far from any and sustained conscious efforts to sell themselves and their ideas and visions, they have spent considerable time and resources attempting to de-market him. The result is that no one knows what they stand for.

When a popular candidate runs on the platform of a party closely identified with the destiny of a people, the outcome is easily predictable: a people’s movement. APGA events attract huge and very enthusiastic crowds which share a sense of mission, in contrast to those of Soludo’s opponents and critics who exist more on the Internet. There are 34 Soludo support groups across Anambra State and beyond, self-financed and driven by proactive devotees, mostly youngsters. APGA is well-etched in the hearts and minds of Anambra people. There are hundreds of thousands of everyday people who have for years been wearing the APGA dress to church, market, office, farm and in the street as a badge of honour. No other party has enjoyed this level of visibility and identification.

There are many prominent members of different parties who during gubernatorial and local elections either secretly or openly work for APGA. To them it is a moral obligation, a matter of identity. They whisper in private, “This is the only party of our people, so we must defend it. At the national level we can belong to other parties”. Highly regarded professional, religious, trade union and other leaders even outside Anambra State often refer to APGA as “our only political address”. They enthusiastically say in Igbo “Nke a bu nke anyi”, that is, “This is truly ours”.

The close identification with APGA doesn’t quite owe to primordial considerations. APGA’s performance record is impressive. No state in Nigeria with Anambra’s level of resources can boast such a record. Anambra, under APGA’s leadership, has a mere 14.8% poverty index. The unemployment rate, according to the National Bureau of Statistics, is 13.1% in a country with 27.1% average unemployment rate. In other words, if you double Anambra’s unemployment rate, it is still lower than the national average. This is an important achievement because for many economists around the globe the employment rate is the most important indicator of the performance of any economy.

Lest we forget, BudgIT, a foremost nongovernment organization financed by the Bill and Belinda Gates Foundation, in August, last year, rated Anambra and the petroleum-rich Rivers State as the states with the best fiscal responsibility index. A few weeks ago, it added Ebonyi to the list of states like Rivers and Anambra states with impressive fiscal responsibility indices in 2021. Anambra’s consistent impressive performance is interesting for a state with no airport, no seaport, no big western multinational companies like Nigerian Breweries, Guinness, Coca Cola, Shell, MTN, Airtel, Chevron, Halliburton, Siemens, etc. Anambra State receives no special allocations from the federation account. It doesn’t benefit from the Niger Delta Development Commission or North East Development Commission. Every Anambra person believes Soludo has the capacity and commitment to take Anambra on a superior development trajectory.

Soludo is the only candidate whose participation in the gubernatorial vote has excited the national imagination. Every setback he has experienced in the journey to Government House has turned out to win him more public sympathy. He gained tremendous public solidarity when he survived last March 31 a vicious attack. Still, much as Soludo is all but certain to triumph in the November vote by a wide margin, he is not resting on his laurels. To him and his team it is not over until it is over.

Anambra State will, within the foreseeable future, remain the Light of the Nation.

First in Class and Leadership Question in Anambra