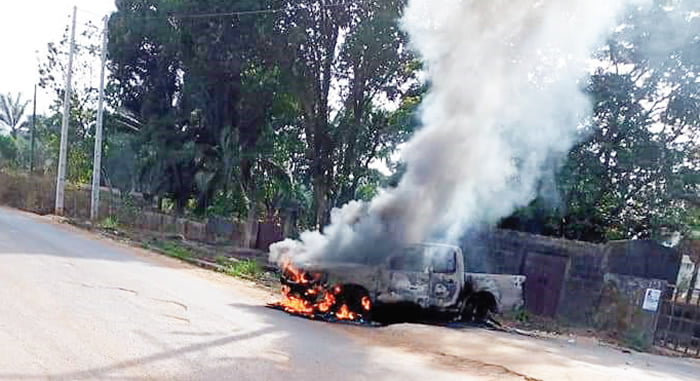 Over a period of two days, three lethal but separate attacks were launched at Neni, Awkuzu, and Ekwulobia.

Ekwulobia Police Station is the target of the latest attack which happened today, 19 March. Reports say two persons were killed during the attack, but Enugu Metro could not independently confirm this claim.

The News Agency of Nigeria (NAN) however said officers of Nigerian Correctional Service Prisons Service) were targets of the attack.

Officials of the Service escorting detainees to court were ambushed and attacked, eye witnesses told NAN, which reported that two persons died in the attack.

NAN also spoke to spokesperson of the Service in Anambra, Mr. Francis Ekechukwu who confirmed the incident.

Anambra Police spokesperson, Ikenganyia Tochukwu, a deputy superintendent, could only say that police immediately mobilized to repel the Ekwulobia attack. He did not say if there were casualties.

The Ekwulobia Police station was torched during the #EndSARS youth campaign against police heavy handedness. It was however renovated and re-occupied prior to today’s attack.

The latest assault follows yesterday’s bloodbath when another group of bandits waylaid policemen and military officers at different locations in Anambra and inflicted heavy casualties.

The gang reportedly killed  three police officers and set their vehicle ablaze at Neni junction in Anaocha LGA. They were also said to have looted the vehicle before torching it.

Three naval officers were also reportedly shot dead at Awkuzu area in Oyi LGA. The gunmen were said to have made away with their weapons.

The Police appear not to have answers to the incident at this time. The Punch quotes DSP Ikenga as saying that police received the reports and was “working to unravel the circumstances surrounding the incidents.”

He however confirmed that one policeman was killed during the Neni Junction ambush attack.

“We are still working and trailing the news; I hope to get back to you soon, when the details are complete,” he told the Punch correspondent in Awka, the State capital.