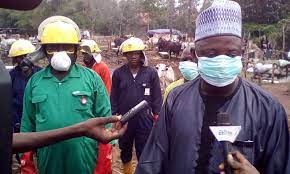 Initially, residents of the area thought the clash was between officials of Enugu Capital Territory Development Authority (ECTDA) and northern traders whose shops were about to be demolished.

However, ECTDA took to Twitter to swiftly deny that it was involved in the clash. It described the attempt to link the Authority with the demolition and clash as a “misinformation.”

Enugu Metro investigations however show that the contest was between a landowner who came with a posse of security personnel to enforce a court judgement on the land.

We learnt that the late Igwe Raymond Nnaji of Akpugo had taken the Enugu State Government to court over ownership of the land where the Artisan Market is currently located.

According to a witness who is conversant with the case but pleaded to remain anonymous, the case was decided in favour of the family.

“Government did not contest the judgement and the family came today to enforce it when they met this resistance,” he said.

The traders who occupy the shops are mostly merchants bringing in cows and foodstuff from the northern region.

Their position, Enugu Metro learnt, is that the State Government officially relocated them from their old Ogui Road Market to the new site and has not given them a quit notice.

A lawyer who is conversant with the case told Enugu Metro that the Nwajanja family {as the late Igwe’s family is popularly known), has the title to the land.

“But the northern merchants occupied it illegally and built up the place. And now they are resisting the attempt to enforce the court judgement.”

The ECTDA statement indicates that the Government is yet to make up its mind how to respond to the tricky situation.

There were no reports of casualties from the violent clash, the first time that northern merchants will battle landowners in Enugu.