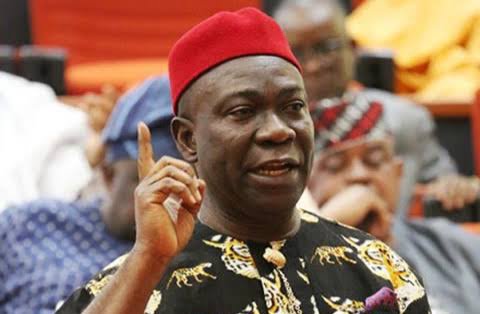 The ebullient Senator said he is running for the office of governor on the basis of experience and capacity.

Ekweremadu pledged to utilise the “experience, friendship, partnership, and global contact acquired… to transform Enugu to a model State.”

He also reeled off a list of achievements as a federal legislator that cut across three Senatorial Districts of Enugu State.

The Senator itemised “life-changing projects” in communities beyond his constituency that he initiated and completed.

The initiatives he listed are in the areas of water, road educational infrastructure, scholarships, health and power.

He said he is motivated to run because being a legislator, he is limited on what to do to further uplift the profile of Enugu State.

“I always wish I could do more (and) I have the will but the means are limited.

“I am limited to what I could mobilise as a legislator in developmental projects and programs.

“…therefore, I believe it is time to focus on Enugu State and people without whom I would not be who and what I am today.

“The governorship of Enugu State will offer me a good platform to serve our dear state more and better.”

The Senator shared his vision of a transformed Enugu State in a pamphlet entitled “A pathway to a new Enugu State.”

The pamphlet details programmes he wishes to pursue in areas of water management, people security, health reforms, and employment generation.

These, he said, will be prioritised even as government continues with basic necessities of road development, education, and youth and women empowerment.

Ekweremadu promised to restore people’s faith in government through an open door policy, justice, equity and liberty to Enugu residents.

His government, he said, will focus and internationally deliver on his manifesto and promises to the people.

The Senator took time to respond to questions from the media, including on the vexed issue of rotation and zoning of the office (see here).

Barrister Joe Asogwa, former lawmaker and Commissioner, was announced at the event as “Coordinator of the Campaign.”

The event designed as a consultation with the media took place at the Best Western Plus Hotel in the upscale Independence Layout, Enugu.

It was screened live on radio, TV and social media.