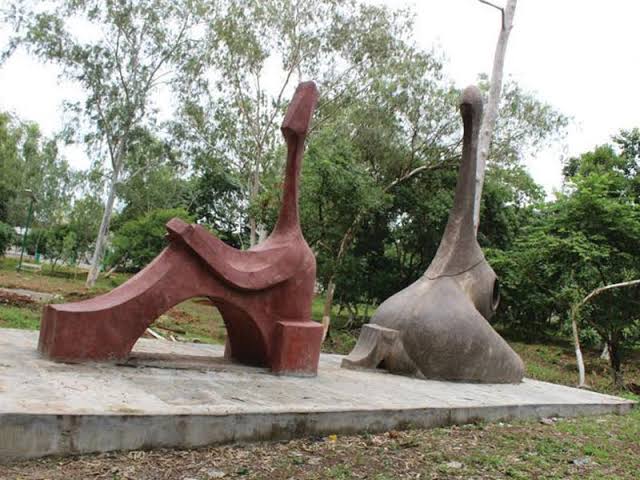 All over the Coal City are famous artworks in Enugu roads and landmarks that beautify the city. These artworks define both the history and the bubbling arts scene of Enugu.

This is an update on 10 Famous landmarks in Enugu

Many of the sculptors were executed by students – and by famous artists. Consequently, Enugu is a unique example of a effective town-and-gown handshake, especially in the Arts. It shows how a city can benefit from having an institution that hosts a famous arts school.

In the course of being conducted round the institution’s Campus II on Abakaliki Road, he was taken to the bespoke IMT Art Garden. This is the place where excellent stude artworks were being kept.

The Governor immediately decided that the pieces he saw there – particularly the sculptural works – shouldn’t just be sitting there. He ordered them to be installed at stragic road junctions and landmarks in the City.
They were to be placed in such a way that Enugu residents and visitors will see and also appreciate them.

A committee was set up to implement the Governor’s directive. They transported a number of artworks and installed them at many spots around the Coal City.

IMT’s Graphics Arts Department (link) has produced many famous artists, including Effiong, Ifeanyi Afuba, Chike Aniakor and the rest. It is a bespoke learning center for artists in Nigeria.

Among the sculptural pieces carted away is the Otigba, the drummer. The Otigba statute is a giant drummer beating an equally gargantuan drum which was placed at the junction where Chime Avenue (New Haven) joined Ogui Road. In short order, the drummer took over as the landmark for the area, subsequently renamed Otigba Junction.

The Otigba Statue was carved in 1980 by Afuba, then a third year student of IMT. In 2020, residents of Enugu watched in horror as miscreants who infiltrated the #EndSARS protests set the iconic sculpture on fire.

A group of artists quickly teamed up together and contacted them Afuba, the original artist, to repair or reproduce another Otigba. The group included organisers of Arts In My City Arts Festival, Society of Nigerian Artist, and Art in Nigeria Project.

Two things distinguish the artworks found around the City. Many of them, like Otigba and the Reticent Baboons (Monkey Junction) in Independent Layout have become landmarks. Today, there are many such iconic works of art that people now use as landmarks to give directions to visitors and those looking for directions to places that they are not familiar with. One of them is Monkey Junction also carved by an IMT student.

The “Three Wise Monkeys” can be found at Ozubulu Street, near the EFCC State Office. They are sitting on the fence, with their famous “see no evil, hear no evil, speak no evil” gestures.

A second attribute of the artworks is that many of them represent the history of Enugu. The first sight that hits visitors coming into Enugu from the Ninth Mile Expressway is a depiction of the 1949 coal miners’ strike. It shows a politician joining a group of miners protesting the condition of the mines. As many as 49 miners were shot dead by the British task masters during the strike.

There is another artwork in front of the Park Lane Hospital, the oldest hospital in Eastern Nigeria, honouring healthcare providers trying to do what they know best how to do – which is taking care of health for the people.

Rounding up these symbolic artworks is the Cenotaph in Okpara Square. It shows a military officer with gone raised high indicating that they presumably the Nigerian Civil War was over. If we move further down to Aguleri Junction, there is amolten sculpture that indicates to all that they have arrived at a court zone – the symbolic blindfolded maiden with a sword and a scale in both hands.

The Ifeanyi Ugwuanyi Government has added a dash of artworks here and there and substituted others. Some of the additions defy rational explanation. Examples are replacing the lions at both entrances to Government House Road and the Lion Building itself with “white lions” and adding three more Otigba artworks in the same Origba Junction.

However, the administration compensated these flamboyant displays with some original pieces that adorm the rehabilitated forest park beside Okpara Square (now renamed Unity Park).

There are so many other artworks in Enugu. The best we can do is to just give you a sneek peak to some of these to whet your appetite.

Welcome to Enugu, the Arts City.