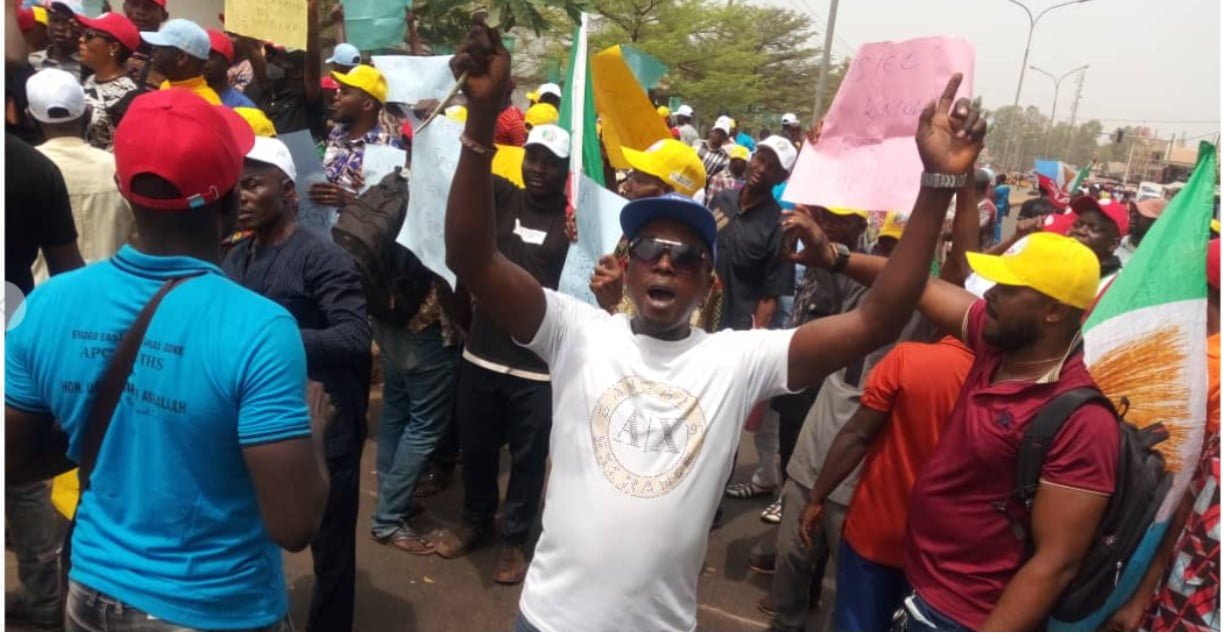 The police effectively warded off the surging crowd of protesters who sang anti-ENSIEC songs and obstructed traffic.

ENSIEC officials however downplayed the commotion, saying police came to assist in the distribution of election materials for the election.

The protesters brandished placards with inscriptions such as: “We say no to political disenfranchisement. “Our vote is our power“, “Say no to election exclusion“, “ENSIEC is not for a particular political party“, “Free and fair election is joy of democracy,” “PDP and ENSIEC are killers of democracy,” among others.

APC State Secretary, Mr. Robert Ngwu, told newsmen that the party is prepaed to take its protest to the highest levels.

“We are here to tell the people of Enugu state that what is going on in ENSIEC is not good.

“We will go all the way to Supreme Court because this election tomorrow (23 February) will be voided. You cannot exclude the candidates of APC and that is against the Constitution of Nigeria, 1999 as amended. It is also against the electoral act to exclude a political party.

“We have made our position known to them both in writing and also through the media. ENSIEC still insists on the election going on.

“We can’t do anything but to show our grievances to let the state know that what is going on is not right.

“This is a new APC and we’re here to compete with the ruling (PDP) party in Enugu State,” he said.

Why we are angry

Ngwu said the party candidates list is supposed to be submitted by the chairman and secretary but “ENSIEC chose APC list by themselves.”

“They chose the list not us. The candidates in the list they published are not our members.

“We have professors running for councillors in APC. We have retired DSS Director running for chairmanship in Isi-Uzo local government. So, how could those people not qualify?

“They didn’t show us the list in the first place even though we submitted their names and that’s what is going on.”

Chairman of ENSIEC, Chief Mike Ajokwu (SAN) accepted that they published a list submitted by a rival faction of the APC.

The reason, he said to the protesters, is because the (Dr. Ben Nwoye) is the one the Commission had related with over the years.

The protesters shouted at him when he said this, and he walked out on them.

ENSIEC Secretary Mr. Chukwudi, said the commission addressed the protesters and told them that APC was not excluded.

He said: “We told them that we didn’t exclude them. What happened is that they have two lists of candidates. And we used the one that is the proper one.”